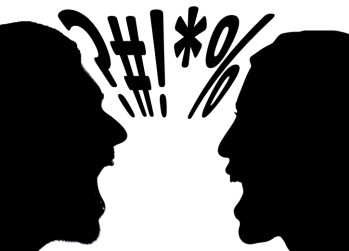 Alice is angry with her husband Greg.  She asked him to mow the lawn before the weekend when the rest of the family will come over, but he hasn’t done it all week. Greg keeps saying he will, but it’s Friday now and their guests arrive tomorrow morning. Greg meanwhile is angry with his wife for complaining about him spending too much time out with his friends last week. Both Greg and Alice know the other person is angry, and both of them know that this implies they’re hurting. But neither Alice nor Greg want to make the first move towards listening to the other person’s hurt. They are locked into a struggle to see who gives in first. Neither is willing to talk to the other about this, and more importantly neither is prepared to listen.

What is happening between Alice and Greg is called a power struggle. Power struggles can be about almost anything. However, they typically have the same characteristics: an ultimatum, either explicitly stated or implied, to come and care for me first before I come and care for you. Usually, they have their origins in hypocritical behaviour: when the rules for one person aren’t applied for the other. Often they are accompanied by thoughts of suspicion and bad intentions, and manipulative phrases like this: “if you really loved me you would do x/y/z for me,” and “the one who cares the least has the most power.”

Power struggles are toxic to a romantic relationship and to a friendship. They tend to bring out the worst in people: Threats, angry tantrums, acting out, paranoia, violence, manipulation, jealousy, self-doubt, and even hatred for the other person are often the fruit of such dynamics. The very person whose company you once enjoyed so much has become not a source of safety, security, joy, and care, but now someone you fear, feel anxious near, despise, and wish suffering to happen to them to teach them a lesson. If a person is sensitive then power struggles tend to develop into a crescendo quickly; hence why sensitive people tend to have short and stormy relationships. If a person is not sensitive then it typically takes years for a power struggle to develop into a divorce causing storm. However, no one is immune from having them.

The situation with Alice and Greg is serious. This particular incident probably wouldn’t cause a divorce, but it’s building up some bad feelings between both parties. Alice wants the lawn mowed before she will ask Greg why he’s upset. Greg wants Alice to ask him why he’s upset before he mows the lawn. If Alice checks in with Greg or if Greg mows the lawn, the situation will de-escalate and a happy outcome from all is possible. However, as simple as the solution is neither person in this situation is likely to take the simplest solution. Rather there is more to this dispute on both sides. Alice believes she has to give into whatever Greg wants, she doesn’t feel appreciated or respected by him. Meanwhile Greg believes he has to give into whatever Alice wants, he doesn’t feel appreciated or respected by her. In a therapy session these two people will literally make the identical complaint about the other person and yet be surprised to hear this because both Greg and Alice see themselves as the only victim.

Alice makes a phone call and hires a gardener to mow the lawn for her. Greg’s attempt to use Alice’s emotional need for a well kempt lawn to push her into submission to his needs has been thwarted. Greg watches the young strong gardener mowing his lawn for his wife and feels his insecurity and anger escalate. He turns on his wife and blasts her furiously for wasting money on a gardener unnecessarily. He starts yelling at her and accusing her of being a cold hearted control freak. Alice, feeling hurt by Greg’s words, returns fire in kind and tells Greg he is a useless lazy old fool and she doesn’t know what she ever saw in him that was good.

The crisis has escalated. This is typically how most relationships end in these trivial power struggles over small things that escalate into full scale tantrums and attempts to completely control the other person. The origin for the tendency towards power struggles is typically growing up in a family where power struggles were considered the norm. They can also develop later in life if you have a relationship with a person who is controlling; they effectively teach you to see relationships as power struggles as well. Hence it is so important not to rush into relationships too quickly! Sometimes couples can reach a stable equilibrium where one person decides to be the submissive partner and allow the other partner to walk all over them without significant resistance. Thus there is a dominant partner and a submissive partner. These relationships can endure but in other respects they are not successful relationships because neither partner is typically happy, nor developing their full potential, and the children are often neglected or traumatised by their parent’s unhealthy example of a relationship.

The ultimate cause for a power struggle is hypocrisy.  The problem is that while one can always reduce the amount of hypocrisy that one has, one typically can’t reach that state of purity between values and deeds all virtuous people seek.  I believe in eating healthily, I tell people to do this, but while I am writing this I am having a lunch of blackberry muffins and a hot dog. Hypocrisy is almost impossible to be rid off entirely, I encourage people to reduce their hypocrisy as much as they can as it will reduce the amount of maintenance they need to do for their relationships in general, but realistically we’re all going to eventually do something that’s going to lead to a scenario with a close friend or partner where they will feel hurt by our hypocrisy. So it’s important to be aware of power struggles so if you ever find yourself in a similar situation to Greg and Alice you know the best solution is better communication; even if it means sucking up the hurt and putting your emotional needs to one side temporarily so you can take care of your partner first.

Greg eventually told his wife he was upset with her for complaining about how much time he spent with his friends when he’d never complained about her spending too much time with her friends. Alice listened to him with empathy and apologised. Then Greg listened to how hurt Alice felt about his promises to mow the lawn, but not doing what he said he would do, and Greg apologised to Alice. Then they remembered how much value and joy their relationship brings to them both.

2 thoughts on “What is a Power Struggle?”