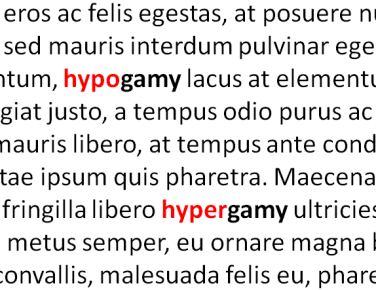 The word hypergamy is being used more frequently, so much so that my spell checker now recognises it as a word. Hypergamy is a term borrowed from biology that refers to one sex’s preference for a mate who is smarter, stronger, taller, more mature, and wealthier than they are. It has been appropriated from biology by some groups in the manosphere and is now frequently used to describe human females and their preferential mating strategy for a man smarter, taller, stronger, wiser, and especially wealthier than she is. However, the opposite mating preference, hypogamy, is still not recognised by my spellcheck and I haven’t read it outside of academic essays relating to biology. Hypogamy is a preference for a mate dimmer, weaker, shorter, less mature, and poorer than oneself. While I have read and heard a lot of discussion about women and hypergamy, I don’t think that there’s nearly enough attention to men and their tendency for pursuing a lower quality mate. Indeed, it is a common complaint from women that they have to play dumb with men, play down their virtues, or even hide their wealth, so as to avoiding intimidating men who shy away from women they don’t feel they are good enough for. Men who date women taller or smarter than them usually get some mockery for this from other men, implying the ideal is to have a weaker dumber girlfriend. An obvious exception is physical beauty. This is possibly the only aspect of hypergamy that men display, except even with this most men are still more willing to sleep with a low quality woman than a woman is to sleep with a low quality man. It often surprises men when they find out that fat women report more sexual attention than thinner women. END_OF_DOCUMENT_TOKEN_TO_BE_REPLACED