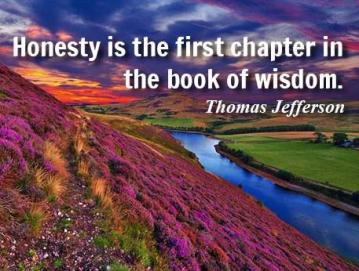 When asked what the most important component of mental health is my first three answers are honesty, honesty, and honesty. More specifically, I am talking about self-honesty, honesty about other people, and honesty to other people. However, the biggest challenge in any relationship is to be completely honest with another person. The feeling of “walking on eggshells” around someone close to you is so common that it’s hard to find anyone who does not relate to being too scared to be open and honest with someone close to them. Why is honesty such a big deal? Why is honesty so hard? How can honesty improve one’s life? How can honesty improve one’s relationships?

In Isaac Asimov’s 1950 book, I, Robot, a manufacturing mistake created a telepathic robot. Because Robots were strictly illegal on Earth, the company was concerned for the public’s reaction if it ever got out that robots could now read minds, so they hushed it up and allowed only a handful of specialists to examine the robot to figure out what had gone wrong in its manufacture to create a mind-reading robot.

Three researchers interviewed the robot, which they named Herbie. One found it to be a mathematical genius, the other a mathematical imbecile, and a third, a female psychologist was informed by Herbie that a man she had a crush on secretly admired her. The psychologist was jubilant to be told by the robot that it had read the mind of the man she liked and all her romantic fantasies were true: He wanted her, he admired her, he was single, and wanted to start a romance with her.   Later, the psychologist was devastated and humiliated to discover that this man did not actually think any of these things. The telepathic robot had lied to her about everything.

The psychologist reminded herself of the first law of robotics: A robot may not injure a human being or, through inaction, allow a human being to come to harm. Herbie read her mind and discovered she was suffering because of her unrequited affection for this man. The robot could not, according to the first law, allow her to come to further harm, so the robot lied to her and confirmed all her fantasies so as to prevent her from continuing to feel harm from the emotional anguish she was experiencing. Likewise, the researcher who wanted Herbie to be a mathematical genius found a robot who was a genius, while the researcher who had an inferiority complex around robots was protected against his feelings of inferiority by finding the robot pretending to be mathematically inept for his own emotional protection.

The end result was that all three researchers made decisions based on the lies told to them by the robot and all three of them suffered much greater emotional distress than they would have if the robot had simply been honest with them. However, the robot could not hurt people, so the robot was forbidden to tell the “hurtful” truth to them, which resulted in the robot causing even more harm!

I think we can all relate to Herbie the robot. He just wanted to help people, to protect them from harm– harm which he saw as being caused by “hurtful” emotions. Herbie was the ultimate people pleaser, reading people’s minds, learning their secret fantasies, and then encouraging them to believe in them with outright falsehoods. Since helping people is considered a noble action, was not Herbie being noble by trying to protect people from reality? Was not reality a harmful agent that caused distress in people? Was he not simply protecting people from this harmful agent?

This is why honesty is so difficult. Honestly in a relationship often means telling people things they do not want to hear. No, that person is not actually interested in you. No, you’re not welcome. Yes, your argument is flawed and you look silly pushing it so aggressively. No, you are not being helpful. Yes, you do look fat in that. No, I don’t want to spend time with you today. Yes, I think it is for the best that we break up. No, I am not going to change my mind. These phrases, and others like them, are some of the most painful things to hear other people say to us. For this reason, it is rare for people to hear these things because most people are deeply conflicted between being honest and not upsetting other people. Thinking about these sorts of problems can almost literally drive you insane. They are examples of no win situations, unless you’re like Herbie and have no moral opposition to lying, albeit, you might be more subtle about it than he was.

If honesty is so upsetting then why is honesty so important? Why is it valuable to allow yourself to suffer honesty from yourself, from others, and to inflict honesty on other people?

The key reason is that humans are social animals. We are most happy living in groups and being connected with each other socially. When we’re alone and isolated from other people, we get stressed out, our health diminishes, we lack motivation (which manifests as depression), we feel anxious and afraid all the time. If you want to live in a fantasy world, then hermitry certainly has advantages because you will not be surrounded by people constantly challenging your fantastic assertions that are emotionally soothing but utterly disconnected from reality. If you want to live with other people, you need to reach common agreement about problems and how best to fix them. The only way you can reach common agreement is for all parties to accept objective reality.

If a man has some character flaw that prevents him from getting dates, he can complain about it and emotionally bully people until maybe someone dates him out of sheer pity, but because he is out of touch with reality, he cannot actually be connected with other people, he can’t be respected by them. He can only be an object of pity, living in isolation in his fantasy world. He will be blind to the flaws that caused him the problem in the first place and be unable to address it while he lives in a fantasy world, in denial about the kind of person he is. He may have frightened or shamed people into telling him what he wants to hear, but ultimately, he will only surround himself with enablers who will make it that much harder for him to identify his true problems, while he continues to wonder why he never feels genuinely loved and respected.

The benefits of honesty on the other hand are worth the discomfort of facing truths one does not want to accept. Once one is honest about one’s situation, one can go about fixing those problems. A person might realise the only reason they are not getting a promotion at work is not jealousy, but that they do not know their job as well as they could. Once they are honest enough to take responsibility for their shortcomings, they can then do some research and learn how to become better at their job and obtain that promotion, whereas the benefits of complaining about other people mysteriously holding them back only serves to paralyse them from advancement.

In a relationship, a person might be in denial about why they have a bad relationship with someone. They might blame the other person for being too angry, too poor, too lazy, too dishonest, too fat, not affectionate enough, or any number of things. Yet they will not be honest enough with themselves to admit that they chose to be in the relationship with this person and if that person does not suit them then it is not the other person’s responsibility to change themselves, but for them to choose a partner who is appropriate for their emotional needs.

Thanks to facing these unpleasant facts, one can now take positive steps to remove negative influences from one’s life. Smoking is harming my health? I can stop smoking. I don’t love myself? I can get therapy. I don’t have a good relationship with my partner? I can talk to them about it. I don’t like my job? I can work towards a new job. I am worried about my retirement? I can now read books about investing. Honesty turns a person from a victim into a powerful agent of change in their lives. How many people do you know who are not honest to themselves about their drug habit? Their drinking habit? Their communication habits? Their work habits? Their self-talk habits? It certainly would not be comfortable for these people to be honest with themselves, but how much different would their lives be if they were honest with themselves? How much improvement could they make if they were no longer in denial and learned to accept the truth about who they are and where they are at in their lives?

People who construct fanciful ideas about themselves, others, their world, and relationships that they do not like thinking about are the ultimate hermits, living inside their heads disconnected from other people. They are unable to experience true intimacy, which is the capacity to be open and honest to other people about your thoughts and feelings. Because intimacy is nourishment for the human soul, these dishonest people are starved for genuine love and acceptance. The only way to achieve intimacy, which feeds and strengthens the human spirit, is to be honest with yourself and other people. It means having to brave upsetting yourself and upsetting other people. It means bravely feeling pain, fear, despair, anger, and vulnerability on the path to happiness. Most of all, it means being real with yourself.

Here is a book review of I, Robot I wrote for those curious about it.